The Hunnic Empire. Utigurs and Bulgarians… is that the same thing?

by Cyril Milchev
and Nick Simeonov


Who are the Utigur and the Kutrigur tribes – on which there is so many accounts from 6th century chroniclers as Procopius of Caesarea, Agathias of Mirena, Menander, Theophylact Simocatta?

The scientific conclusion that the ethnonym "utiguri" refers to the Bulgarian ethnicity and that all information in the ancient Greek-language records referring the "utiguris", are an integral part of early Bulgarian history, is backed up sequentially in the western and the Russian history science up until the midst of twentieth century.

Already in 1772 (Allgem. Nord. Geschichte, 358), the German historian August Schloetzer  identified the utigurs and the kutrigurs with Bulgarians, on the basis of the information provided by Greek-language late antiquity chronicles (Procopius, Agathias of Mirena, Menander, Theophylact Simocatta).

This hypothesis saw light, as written in 1890 by D.I. Ilovayskiy almost by all science representatives and has continuity in the works of Tunman, Engel, Chertkov and Ilovayski himself, who in his essay "The beginning of Russia" (M., 1890) dedicates a special chapter, named "Utigurs and Kutrigurs in the works of Procopius and Agathias.”

After 1950s in the Soviet historical science a new theory about the origin of Bulgarians had been imposed, which equates them with the Kaganate Turks /of Istemi/ movement west of Volga river, but whose presence in the notices about the areas of Caucasus mountains and Azov sea begin from the mid-sixth century on. Apparently timing is crucial as to be understood that utigurs and kutrigurs actually predate the Turkic invasions with few centuries. Never the less, the wrong had already been done by the soviet scientists, while the “old European theory” that kutrigurs and utigurs are of Bulgarian ethnicity just vanished from historical science of the Soviet block.

Last of the works on utigurs and utrigurs from the Soviet science block had been written in 1962 by M. Artamonov. The Turkic-Kaganate hypothesis for the origin of Bulgarians is still held tight and imposed officially by USSR scientists as Sirotenko, Pletneva, Novoseltsev, Gumillev and Artamonov himself.

It is important to stress out that the main reason of this switching on the theme of Bulgarian origins, still imposed by Soviet scientists and their followers is the total public rejection and disgrace upon the works of N.J. Marr, which rejection had been directed personally by Josef Stalin. Leading soviet historian - N.J. Marr in his works already in 1920s suggests the so-called Japhetic theory – a Mesopotamian origin of Bulgarians and Chuvash peoples. No one in the Soviet Union up until 1950s sought Bulgarians to be considered a Turkic tribe from Altai. One can conclude that one reason for the Soviet Union after 1950s’ to raise the argument that the Bulgarians are Turks, is the collapse over Marr and his "Japhetic theory", imposed by Stalin himself in a pseudonymous article: “Marxism and Problems of Linguistics” - Joseph Stalin's work, most of which was first published in June 20, 1950. This way the start of annihilation of Marr’s visions and consequently led to total disaster of Bulgarian cause in the scientific society. Next step of Soviet scientist was to banish the idea of tracing Bulgarian and Chuvash languages to Mesopotamian; and contrary to all evidence of the Arab sources, Bulgarian language had been equaled to the language group of the Turks.

Careful interpretation of the data on utigurs and kutrigurs, given by Procopius of Ceasarea, points out that they were Huns. Procopius gives a very interesting genealogy: the origin of the Huns is Cimmerian, he writes, but then two brothers named Kutrigur and Utigur split their father’s empire into two separate tribes, which bore their names from now on. These two tribes attacked the Goths, who dwelled west of Meotida (Azov Sea) (c. 375).

After the collapse of central European empire of the Huns, ruled by Attila, the later- utigurs and kutrigurs came back via Panonia – to their former lands around northern coast the Black sea. Utigurs returned to their "old dwelling places" to the east of Don river, "to rule alone", while the kutrigurs settled the areas from Bospor to Kherson (now Sevastopol). As we see, kutrigurs settle on a Hun conquered lands, while the utigurs, according to Procopius, returned to their ancient lands.

We should notice one more interesting thing in Procopius. In his anti-Justinian treatise "Secret History", he gave up on the names "utigurs" and "kutrigurs", which he himself had first introduced previously in his works, but now, when he writes about them in "The Secret History," Procopius  calls them with the common name - "Huns”.

That is because utigurs are allies of the Emperor Justinian I (527-565) after 528, while the kutrigurs constantly attack Byzantium, Procopius was apparently is held responsible by the Emperor to distinguish between those two hunnish tribes (?).

Nevertheless in his later anti-Justinian work "Secret History", the same Procopius gave up this division /utigurs-kutrigurs/, which distinguishment, as we learn from Agathias was a favorite subject of Justinian I to discuss in the Senate, while he boasted that he actually made those tribes open hostilities between themselves.

The same Agathias of Mirena, who works after Procopius, wrote that utigurs and kutrigurs have killed one another because of Justinian’s clever diplomacy, and then those tribes “disappeared”. This conclusion is obviously incorrect given the fact that Menander, who writes after Agatius’ works, again mentions utigurs and kutrigurs as fierce powers of the day, in the times of emperor Justin IІ  (565-578).

Procopius writes: "Beyond the Sagins live many Hunnic tribes. Expanding from that point country is called Evlisia (Procopius evidently used information from "Anonymous Periple of Pontus Euxinus," where this country beginning form the Sagins dwelling places and up to Don and the Azov Sea is actually spelled "Evdousiya"), Its coastal area, aswell the interior is inhabited by barbarians up until the so-called "Meotian swamp " (Sea of  Azov ) and the river Tanais (Don), which flows into that "swamp". In turn, the swamp overflows into Pontus Euxinus (Black Sea). The people who lived there in ancient times were called Cimmerians, now they are called Utigurs. (Book .ІV.4, The war with the Goths). "

Procopius further states that in his time kutrigurs lived west of the river Don: "If you go from Bospor city to Kherson city, which is located in the coastal area and has long been subject to the Romans, all these lands between the two cities are inhabited by barbarians of the hunnish tribes" (Book .ІV.5).

The riddle that Procopius of Caesarea has left to us, needs to find a suitable solution, he states that even by his own lifetime (mid-sixth century) the utigurs, who neighbored the sagins, but north of them up to to the Don river are called utigurs; hence by the same time (555) an author from Syria, known as Pseudo-Zacharias Ritor placed there the "burgar" tribe, i.e. called them "Bulgarians". Pseudo-Zacharias Ritor lists 16 different tribes north of the Caucasus, but in that name list we cannot see the utigurs.

Adding to that, the goth’s late antiquity historical accounts also knows nothing about the ethnonyms "utigurs" and "kutrigurs" who would attack the goths during the fourth century, in the time of Hermanarich ... Somehow, Cosmas Indicopleustes in his topography from the mid-sixth century, placed Bulgarians between girkanians {who dwelled to the south of Caspian sea} and the heruli tribes {dwelling to the north of the Black sea}.

Theophanes in his chronicle from the 9th century is strictly following Procopius’ logic, but occasionally corrects it. Procopius wrote that "utigurs and kutrigurs" are "of one origin", while Theophanes already knows nothing of “utigurs” thou writing of “bulgars and kotrags” who were /according to him/ "of one origin".

It is thus clear that the name "utigurs" is interchangeable with "bulgars" and that Procopius puts it into circulation not by a chance but because it has some connection with the bulgarian prehistory. What could this connection be? Procopius introduces the name "utigurs" in the same moment when he gives (for the first time) some kind of genealogy to the utigurs, and thus this genealogy leads to cimmerians.

Priscus of Panion reports in fr.33 of his historical work from the 5th century on: "Helhal, born a hun" who up to 467 commanded legions of the Byzantine army of Aspar.

Obviously the name of this hun is a sobriquet, which contains the name of his native village Helhal, and it is located, according to Armenian historian Movses Kalakantuatsi in the gavar of Utik, south of the Caucasus, where there actually is a town, named Helhal.

Armenian historian of the Vth century Elishe also mentions this village, "near the border of Iberia and across the city of Halhal" (History, Part III).


Utik is the Armenian name for the region Uti (Long before that Strabo writes that the inhabitants of this region call themselves "Udins"). This area is located on the border between southern Georgia and northern Armenia. 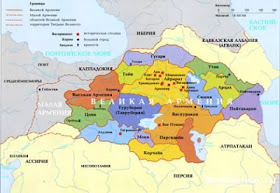 Exactly the same territory is connected to the history of Cimmerians during VIII-VII century BC and exactly there was the historical homeland of cimmerians (A.I. Ivantchik). 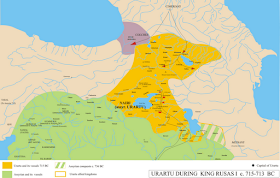 The term "Bal", according to onomastyc data and according to Ivantchik was known to the Scythians (οὐαδτόβαλος) and means "a favorite of the {battle} group". In Ossetian language - cognate with the scythian language, the term "balz" meant " mobile military squads" and is associated with several degrees of initiation, during which young people undergo to become men. In iranian language, "cimmerians", according to the etymology of Dyakonov, comes from Iranian gam-ira {e.g. mobile military squad}. We can easily conclude it holds the same meaning.

Those facts raise many questions that cannot be solved in a breaf but thou need serious attention because early Bulgarian history is poorly studied. The term "Balgar" probably consists of "Bal" (Scythian-Ossetian word for participants in military campaigns) and of "Gar" ("Gu / Qu-ri-a-ni-a"), as was known the land to the north of Urartu; from where towards south began the cimmerian invasion of Urartu /VII-VIII century BC/and the defeat of Urartian king Rusa.

After 4th century BC this Caucasian toponyme was without any doubt brought to the north of the Caucasus as "gerua" (mentioned in Ptolemy in 2nd century AC and in the Armenian geography of Annan Shirakatsi from the 7th century,), because indeed to the end of 4th century BC . in Southern Caucasus appear the ibers (proto-georgians).

Apparently the post-cimmerians; which Procopius points out to be predecessors of the huns utigurs have migrated during the 4th century BC, from Southern Caucasus, where the gavar Utik was located, up to north of Caucasus Mountains.

We do not think that the riddle that Procopius of Caesarea left to us regarding the name "utigurs" but definitely it is of utmost importance those questions to be properly addressed by historical community. As for example we have accounts from 7th century B.C. of a Cimmerian ruler Sandakshatr and 9 centuries later- a utigur ruler named Sandilch [6th century A.D.}. 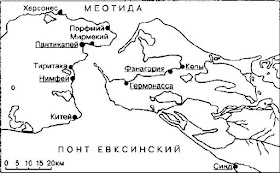 The question of the origin of utigurs, bulgars and cimmerians still remains unsolved although some scholars easily put them among Scythian tribes without paying attention to their differences compared to Scythians and later Sarmatians. It is repeated over and over again that the utigurs crossed the Volga and entered into Europe around the year 460 within the larger context of the Great Migrations and the Turkic expansion. What contemporary scholars fail to explain is where are the evidence of such migration from east-to-west? And surely comparison cannot be made because fact is- evidence shows by utigurs a continuity of living in the areal and dwelling along Crimea-Caucasus-Caspian Sea and nothing suggests deployment of those tribes from the north or from the far east. Many facts remain outside the attention of researchers of early Huns and Bulgarian past. In our view, interconnection between cimmerians, huns, utigurs and their successors – the Bulgarians has to be made clear or to be rejected by the means of science and not by the means of political speculation as we saw done in early 20th century. 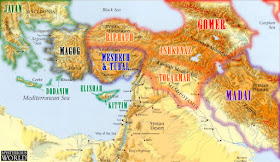